Where are the UK’s most dangerous roads for cyclists?

Home / Latest News / Personal Injury / Where are the UK’s most dangerous roads for cyclists?

The lifting of lockdown restrictions over Summer 2021 has seen people getting back out on the roads, as we begin to return to some form of normality.

According to government reports, cycling saw a 200% rise during 2020, and as the country continues to spend more time on the roads we wanted to investigate how these changes could impact the safety of cyclists on the road.

As experts in handling personal injury claims, we know that cyclists are more vulnerable on the road than other road users – be it from adverse weather conditions, heavy traffic, or other road conditions.

Cyclists are more likely to suffer a serious or life changing injury from an accident than many other road users. While cycle helmets offer protection against the most serious head injuries, bikes just do not offer the same protection as a car user has while on the road.

We sought to find out which cities in Great Britain have the worst rates of cycling accidents, and therefore where the most dangerous roads for cyclists are. Using the latest figures from the Department for Transport (DfT) and Transport for London (TfL), we’ve compiled a 10-year look at road traffic accidents involving cyclists that lead to casualties, along with local authority and city specific data to reveal the areas of the country with the most reported accidents involving cyclists, even if an injury did not occur.

According to the latest data from the DfT, there were 16,230 casualties involving cyclists across Great Britain in 2020 – accounting for 14% of all RTA casualties across the country. In this data, ‘casualties’ refers to those killed, seriously injured, or slightly injured while on a bicycle.

Overall, 2020 was a record year for cycling deaths even despite the pandemic, accounting for 10% of all road fatalities, and the highest single year across the last 10 years.

Which areas saw the most cycling accidents in 2020?

The DfT data also highlights that there were even more cycling accidents reported last year, even if an injury was not sustained by the cyclist that was classed as a casualty. According to further data requested from the DfT in October 2021, there were a total of 16,455 reported accidents involving pedal cyclists across Great Britain in 2020.

A breakdown of local authority stats for 2020 reveals where the hotspots for cyclist accidents are. 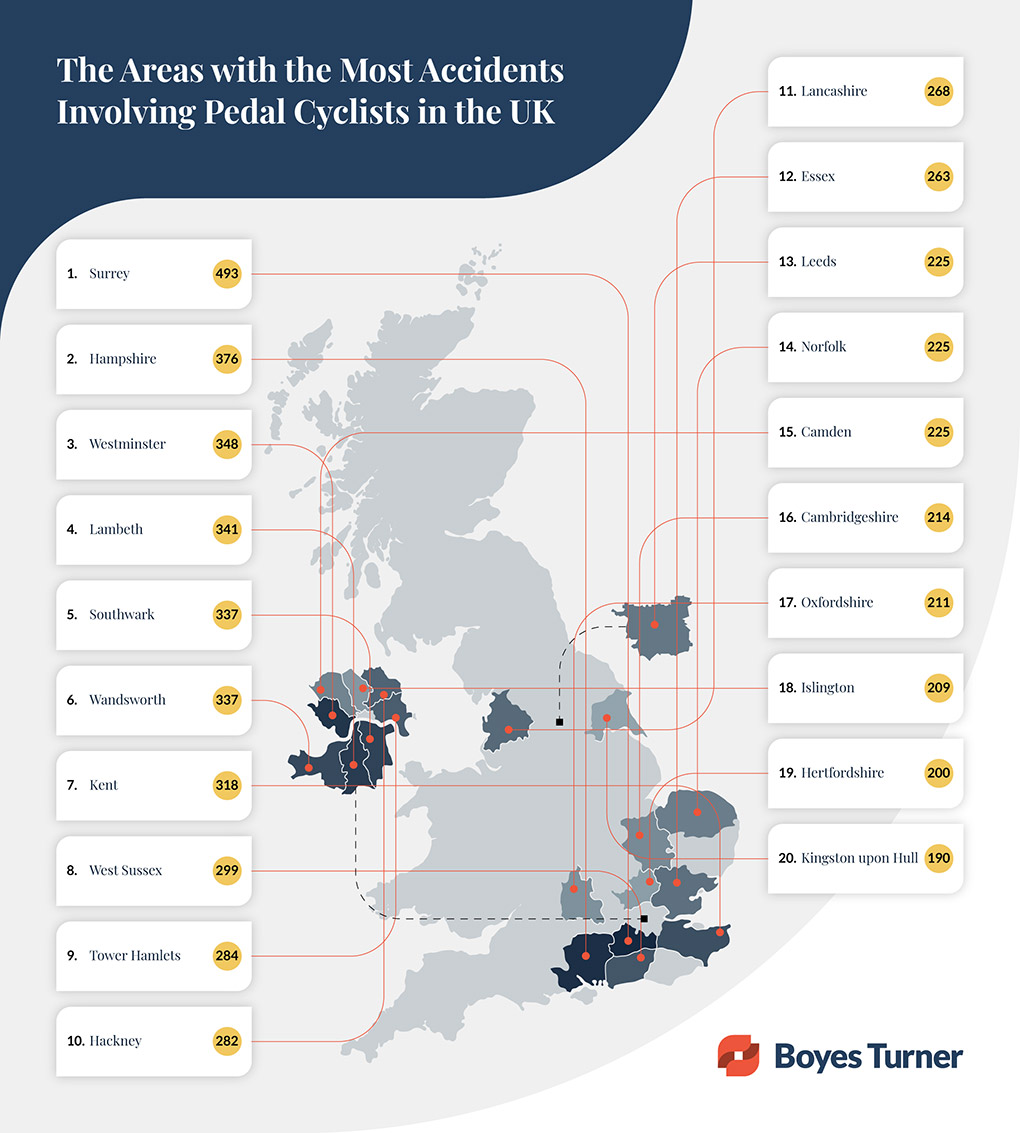 The safest area for cyclists was the Outer Hebrides in Scotland, with just one reported cycling accident in 2020.

The most dangerous area for cyclists according to local authority figures is Surrey, which reported 493 accidents involving cyclists in 2020. This is followed by Hampshire (376) and Westminster (348).

The most dangerous cities for cyclists

Analysing recent historical data for cycling accidents on a city level reveals the most dangerous cities for cyclists in the UK.

According to CrashMap, which uses DfT data to highest the cities with the highest number of cycling collisions, London is the city with the most cycling collisions – with 11,560 involving cyclists reported since 2016. The A3211 between London Blackfriars and Embankment is the most common location of serious collisions in the city, and road users should take particular care around Temple tube station – with the data showing more cyclist fatalities occur here than any other area of London. 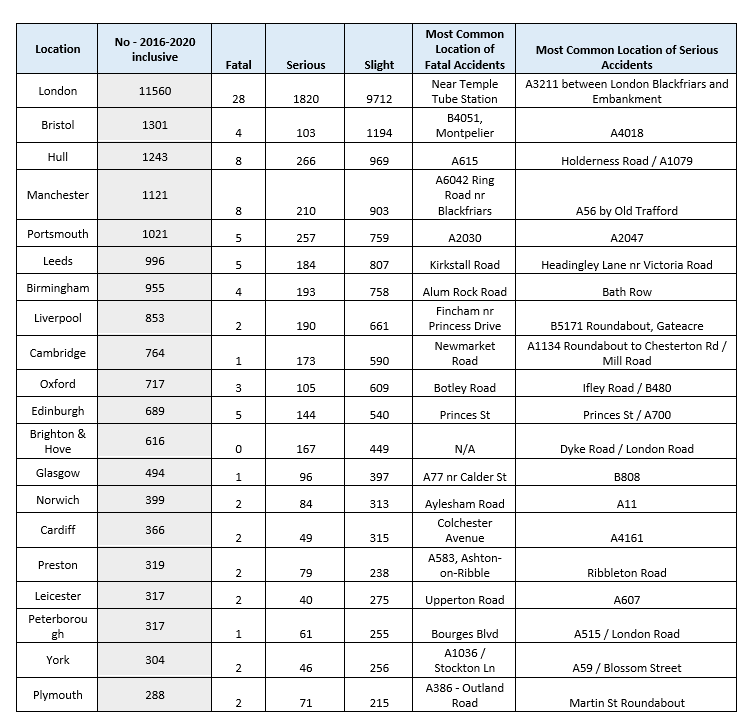 Outside of London, the data shows Bristol is the most dangerous city for cyclists, with 1,301 collisions since 2016.

Bristol’s A4018 is the most common site of serious collisions involving cyclists in the city.

Hull follows closely behind as another hotspot for cycling collisions, with 1,243 reported since 2016. Here, cyclists will want to be extra careful on Holderness Road, which has been identified as the most common location of serious accidents in the city.

Data from Transport for London allows us to identify the further dangerous streets and junctions in the city, using data from 2016-2019.

Whitechapel, particularly around the Royal London Hospital, has been highlighted as an area of particular concern for cyclists, with 103 collisions reported.

Other roads that cyclists may want to avoid or take extra care when travelling along include the junction where Whitehall meets The Mall, close to Trafalgar Square. From 2016 to 2019, 61 cycling accidents were reported at this junction alone.

Another frequent spot for cyclist collisions is the route from Cannon Street to London Bridge in the City of London, so office workers who choose to commute by bicycle may want to be particularly cautious during rush hour.

Cyclists are particularly vulnerable on British roads, especially in areas that do not have marked out cycle lanes, and cyclists are more susceptible to injury in collisions than motorists. Our analysis has shown the areas where cycling accidents are most common, with London unsurprisingly seeing a large number of cycling accidents in recent years.

If a cyclist suffers a serious injury which was caused by the negligence of another road user, they may be entitled to claim compensation. When it comes to cycling accident compensation claims, it’s important the victim receives early advice and specialist handling from experienced solicitors, to ensure the best chance of recovery through rehabilitation and full compensation.

Data on reported road casualties by road users type and severity, Great Britain 2010-20 sourced from Department for Transport in October 2021.

Data on most dangerous London roads/junctions for Cyclists sourced from Transport for London in October 2021.